Turkey’s central bank left its benchmark interest rate unchanged in its first meeting under its newly installed chief, but in a sign of greater dovishness, it dropped a pledge to deliver more rate hikes.

The Monetary Policy Committee held its key rate at 19% Thursday, in line with the forecasts of most analysts in a Bloomberg survey.

While the decision matched market expectations, the bank’s omission of an earlier pledge to keep monetary policy tight and even deliver additional rate hikes if needed weighed on the lira. The currency reversed earlier gains and was trading 0.5% lower at 8.1226 per dollar at 3:01 p.m. in Istanbul. 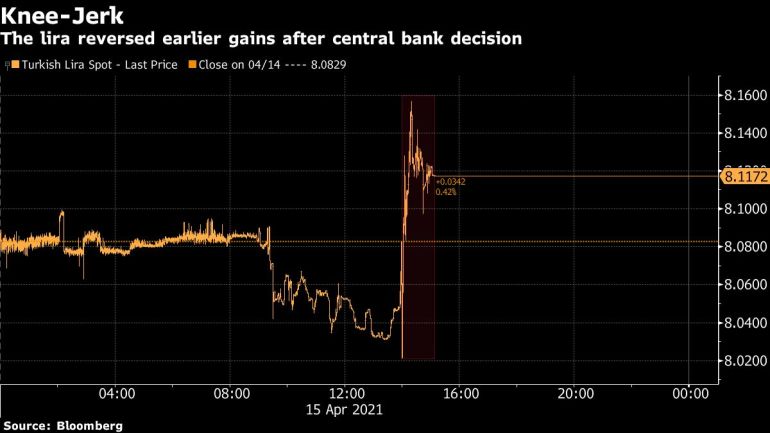 Abandoning the earlier hawkish language, the monetary authority said it “has decided to maintain the tight monetary policy stance by keeping the policy rate unchanged.”

Many investors perceive the new governor to be under pressure to reduce borrowing costs to boost growth. Although Kavcigolu has said he would not rush to loosen the stance he inherited, the changes in the rates decision prompted further speculation that rate cuts might be imminent.

“The language also suggests that they are looking for opportunities to lower interest rates,” said William Jackson, chief emerging markets economist at Capital Economics. He also noted there were “reassuring” comments by the bank in the rest of the decision.

Jackson’s Capital Economics and HSBC Bank were the only dissenters in the Bloomberg survey, predicting the meeting would deliver a reduction of 200 and 50 basis points, respectively. 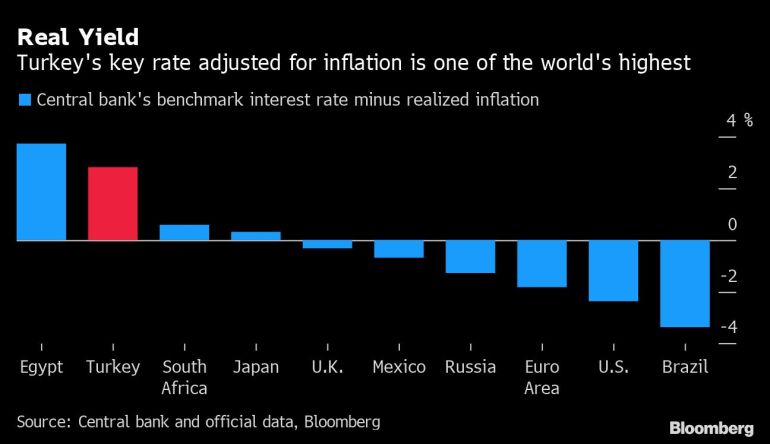 In a written interview with Bloomberg after his appointment last month, Kavcioglu said markets shouldn’t view a rate cut at the April 15 Monetary Policy Committee meeting as a given, easing some concerns among investors.

Turkey raised its benchmark by 200 basis points on March 18, at Naci Agbal’s final rate-setting meeting as governor, elevating the key rate adjusted for inflation to one of the world’s highest. A professor of banking, Kavcioglu was among the critics of that move, saying it could damage economic growth.

Last week, Erdogan said the government was determined to both reduce inflation and cut interest rates to single digits, prompting a slide in the lira. The currency has weakened more than 10% against the dollar since the unexpected appointment of Kavcioglu. Foreign investors sold a net $1.2 billion in Turkish equities and similar amount of government bonds and the benchmark Borsa Istanbul 100 Index slid 8% during the same period.

Inflation accelerated to an annual 16.2% through March, up from 15.6% the previous month because of a global oil rally and weaker currency, leaving the new central bank chief little room to enact the interest-rate cuts that would mollify Erdogan, who holds the unorthodox view that high interest rates cause inflation.

(Updates with more details from the central bank statement, analyst comments.)
–With assistance from Harumi Ichikura.