A staggering 233,152 Mexican health workers have caught COVID-19, and 3,699 have died from it, according to government data, giving Mexico the highest death count for health workers in the world.

Across the globe, there is consensus: health-care workers get vaccinated first.

Nowhere other than Mexico have so many health workers died during the pandemic. And now many say they are being passed over for inoculation and are protesting by blocking main roads and the president’s national palace.

“They need to wait,” said President Andres Manuel Lopez Obrador during his morning press conference on Friday. “We’ll all get the shot.”

Lopez Obrador and the virus czar Hugo Lopez-Gatell have repeatedly said that all workers that are strictly in the frontlines of Covid have received their vaccines, but they focused on staff of public hospitals assigned to cover coronavirus cases.

Not everyone has been covered, says Miguel Mata, who heads an association of 15 ambulance providers. Not a single paramedic in his group has gotten a vaccine. “We just don’t understand the government’s priorities,” he said.

The country’s vaccine rollout in December did start with frontline health workers. But the government quickly jumped to the elderly and teachers.

World Health Organization guidelines say in a recent report that protecting health workers “protects the availability of a critical essential service.” It’s also, the WHO says, about paying it back.

“They play critical roles, working under intense and challenging conditions, putting not only themselves but also potentially their households at higher risk for the sake of others,” the report says.

Mexican ophthalmologist David Berrones is leading an effort to collect data on unvaccinated colleagues. Since last month, more than 30,000 medical staff have added their names. At least 12,000 indicated that, with jobs such as family or pharmacy physicians, they make first contact with patients and should be eligible for the vaccine. Only seven people who signed have gotten vaccinated since.

Berrones says many other health workers, who don’t have access to social media, are also waiting.

“It’s a mistake to think that the vaccines should be just for a fraction of health workers,” he said by phone. “It’s the health workers who are your first point of contact, not only those who are necessarily frontline workers, who have died most around the world.” 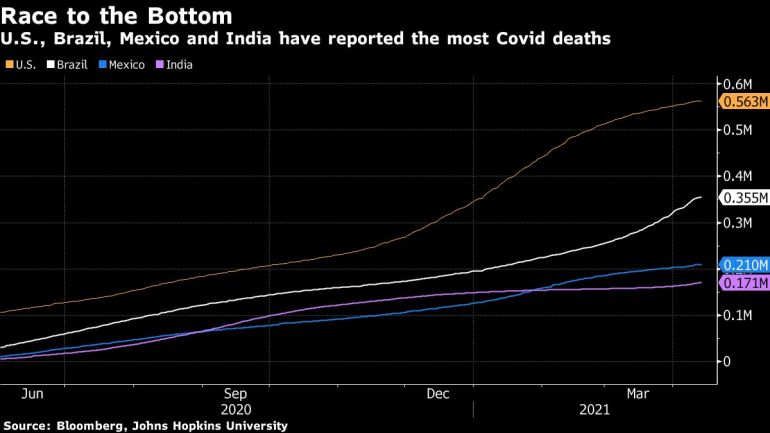 A staggering 233,152 Mexican health care workers have caught the virus, and 3,699 have died from it, according to government data from April 5. Another 234 are suspected to have died from the virus. That is the highest count for any country in the world, followed by the U.S. with 3,607 deaths.

Last month, Mexico became the third country in the world to pass 200,000 Covid deaths, behind only the U.S. and Brazil. The exact toll is likely more than double, with excess deaths at 417,000 according to recent government data. The president has resisted mandatory lockdowns and has largely pressed forward with the same priorities he had before the outbreak.

Mexico has given some 11.4 million shots, equivalent to a first dose for 7.3% of the population. Just 1.6% are fully vaccinated, according to Bloomberg’s Vaccine Tracker. About 900,000 of those have gone to health care workers.

In a letter to Lopez Obrador, his health minister and coronavirus czar, a group of medical associations and colleges demanded that all medical staff in the country be prioritized for vaccines.

“Our exposure and likelihood of catching Covid-19 is higher than the average population as asymptomatic and symptomatic patients seek care for other ailments,” the letter reads. “It doesn’t matter if we’re dentists, nurses or general doctors.”