Why the China – Russia Relationship Should Worry You

Lebanon is suffering from its worst economic crisis in 30 years. Across the country, tens of thousands of people have lost their jobs and millions more struggle to buy basic necessities – all amid the continuing coronavirus pandemic.

The crisis has caused the value of the Lebanese pound – or lira – to plummet to record lows. Lebanon imports about 80 percent of the goods it consumes, so a weak lira has had a serious effect on people’s purchasing power. Food items today cost about five times more than they did in 2019.

Since October 2019, thousands of people have protested across the country to demand an end to widespread corruption and tax increases. At the time, 10,000 lira were officially worth $6.63 and could buy basic necessities such as milk, rice and vegetables. Today, you would be lucky to buy a litre (one quart) of milk for 10,000 lira, which is worth less than $1 on the black market.

The cost of food, clothing, medicines

To see just how much the prices of food, clothing and medicines increased over the past two years, we looked back at weekly offers at two of Lebanon’s largest hypermarket chains, Carrefour and Spinneys.

Basic clothing, such as a basic, no-name T-shirt, increased from 6,500 lira to 55,500 lira – nearly nine-fold. Other basics such as bread increased for the first time in 10 years despite flour being subsidised by the government.

The price of some medicines has also increased. According to ministry of health data, the price of paracetamol, a common painkiller, increased four times. Other medicines, including penicillin and insulin, are subsidised by the government and so they saw only marginal increases. Lebanon is facing severe medicine shortages following an announcement by the Central Bank that threatened to remove subsidies, triggering panic-buying and hoarding.

The infographic below shows how much more expensive food, clothing and medicines are today compared with 2019. 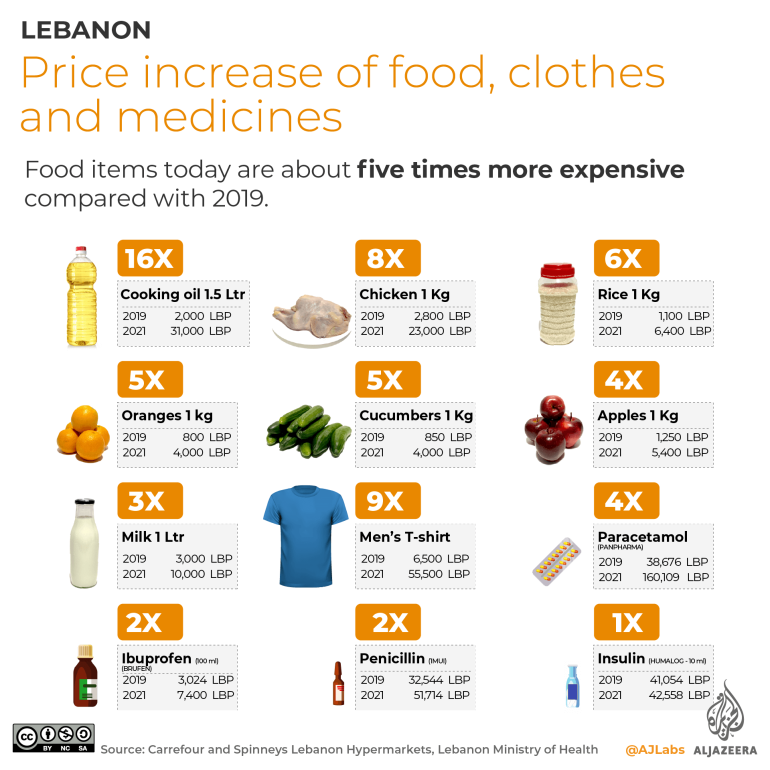 Officially, the Lebanese currency is pegged to the dollar at 1,507 pounds. However, an acute dollar shortage in the country means a parallel exchange rate dominates the local market.

In March 2021, the black market exchange rate averaged 12,250 lira to one dollar – about eight times the official rate.

To combat this, the government has blocked currency exchange websites and shut down several exchange shops trading with informal rates. Many Lebanese banks have also limited the number of dollars customers can withdraw, causing further outrage. 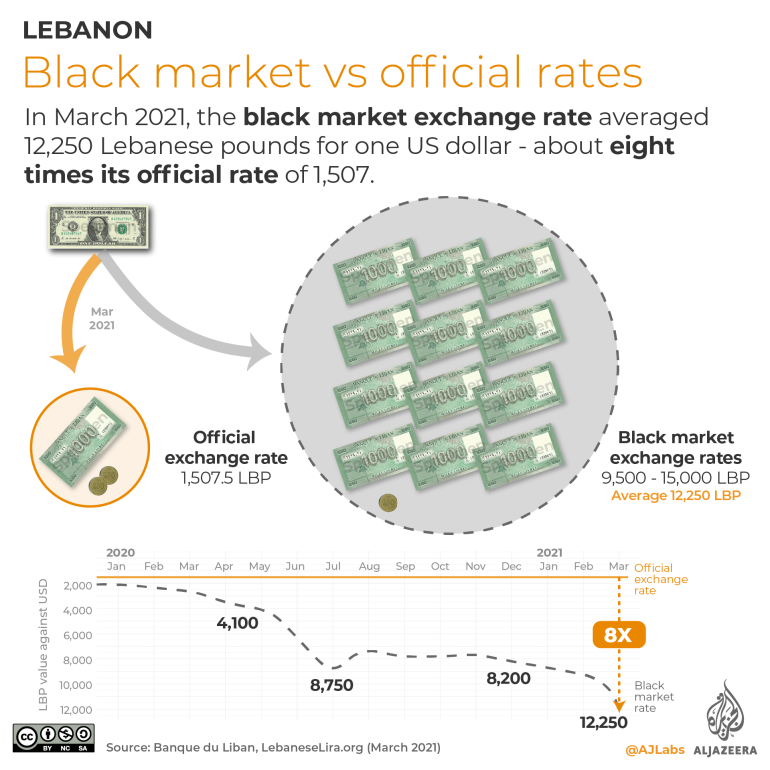 Owing to the economic and social prosperity of the 1960s and 1970s, Lebanon was long known as “the Switzerland of the Middle East”.  With Beirut as its bustling capital, the picturesque Mediterranean country attracted foreign investments and tourism. During the 1960s and 1970s, $1 cost just three lira.

Then, in 1975, a civil war ravaged the country. Over the next 15 years, some 200,000 people were killed and more than a million were displaced or emigrated. Lebanon’s currency plummeted. At the end of the war, $1 could buy 1,000 lira. 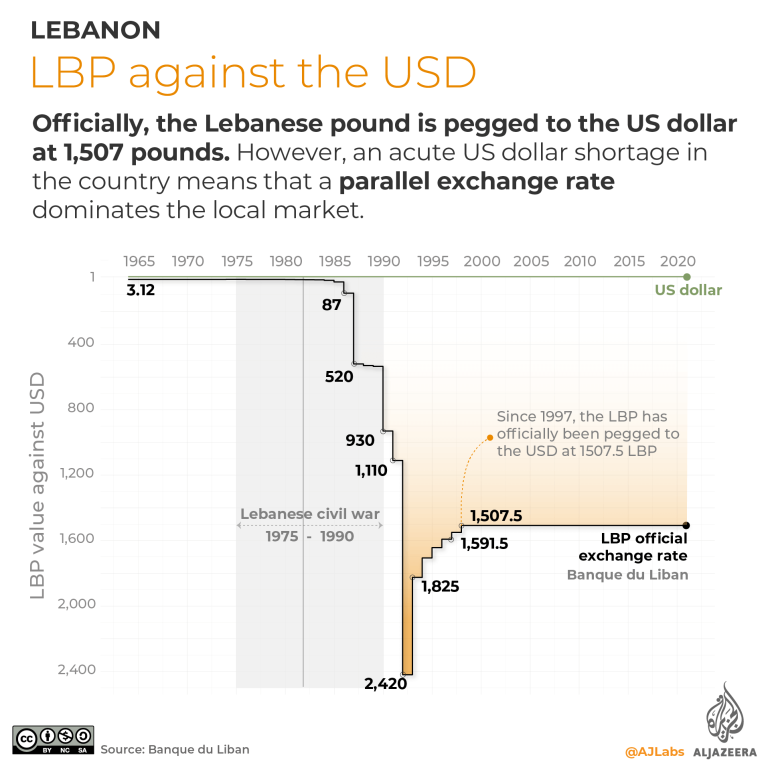 Following the Taif Agreement that ended the war, the country’s main political groups each received a slice of political power and began to rebuild the country.

Through foreign aid, tourism and remittances sent by millions of Lebanese abroad, Lebanon’s economy grew rapidly, reaching a peak of $55bn in 2018. All the while, the country accumulated a mountain of debt, which had reached $90bn by 2020 – or 170 percent of GDP, making it one of the most indebted countries in the world. 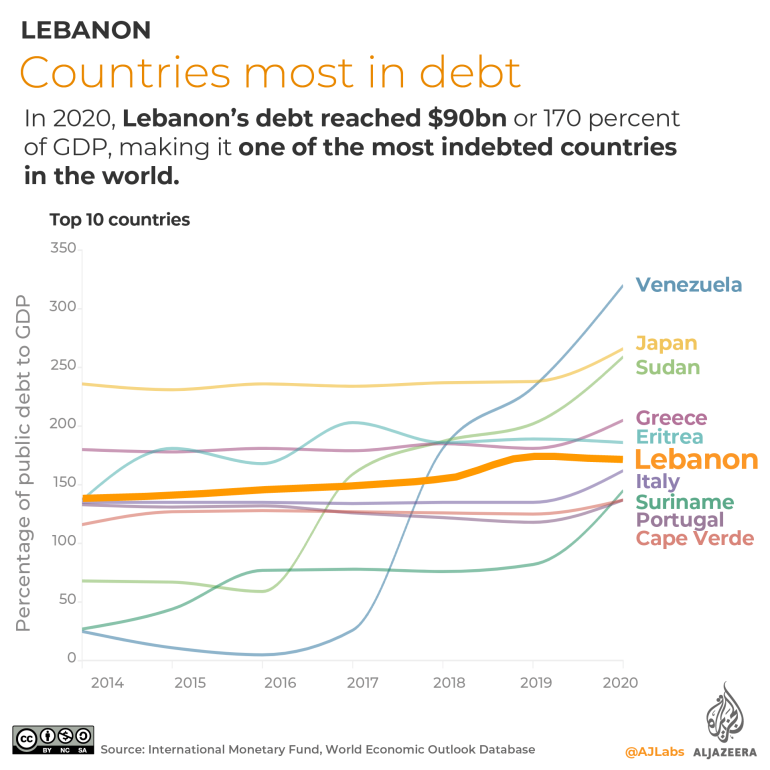 The crisis has seen tens of thousands of people lose their jobs and poverty soar to more than 50 percent, according to finance ministry data. Last month, social affairs minister Ramzi Moucharafieh said some 70 to 75 percent of the population required aid after the economic crisis was exacerbated by the coronavirus pandemic, while the IMF forecast the economy would shrink by 12 percent this year – one of the worst recessions in the world.

A report by UNESCWA in 2020 found that Lebanon has one of the most unequal wealth distributions around the world. About 70 percent of the country’s personal wealth is owned by only 10 percent of its adults. 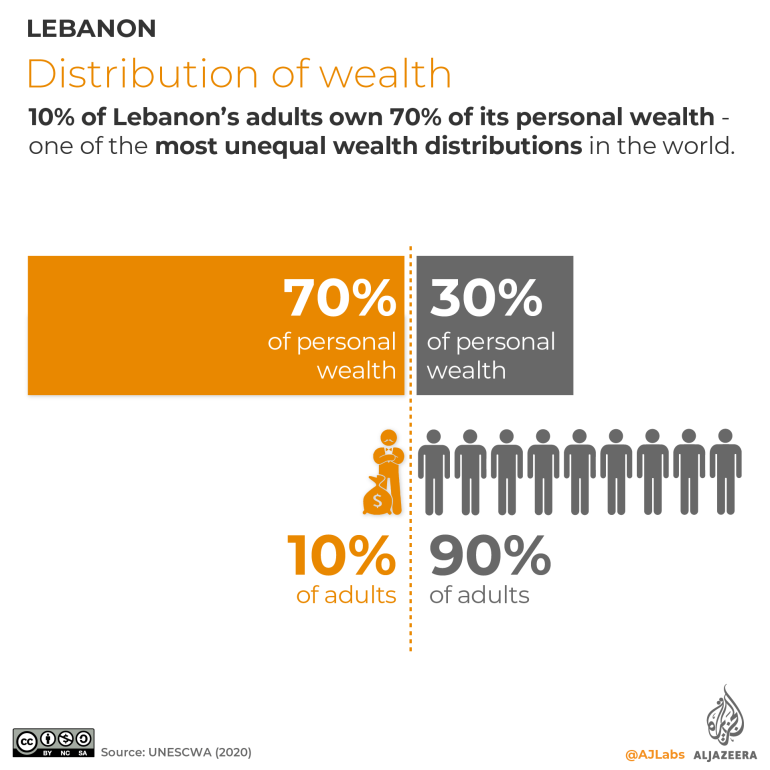 The same report found that the number of Lebanese living in poverty increased from 28 percent of the population in 2019 to 55 percent in 2020. This means that nearly three million people struggle to buy basic necessities. 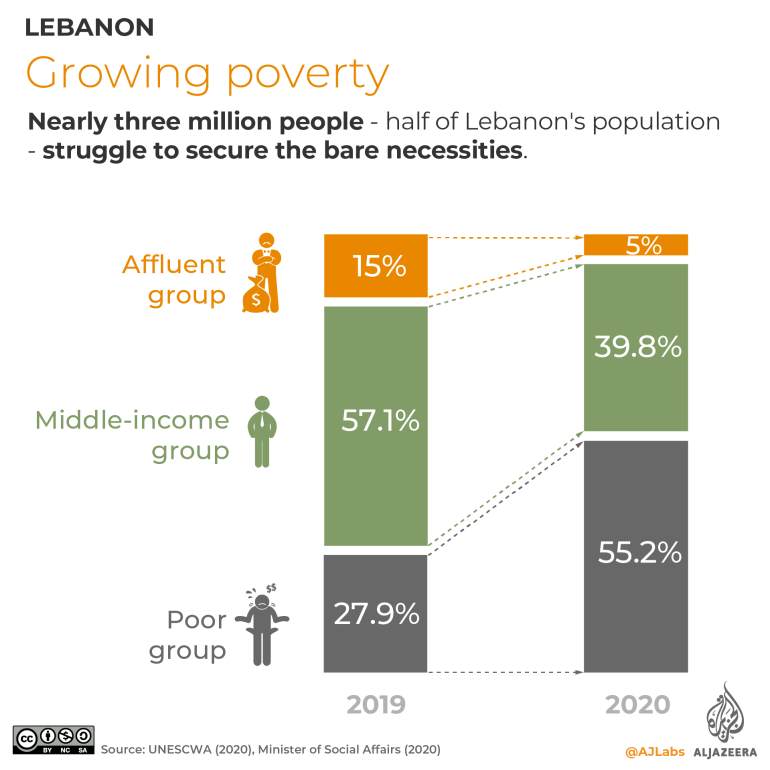